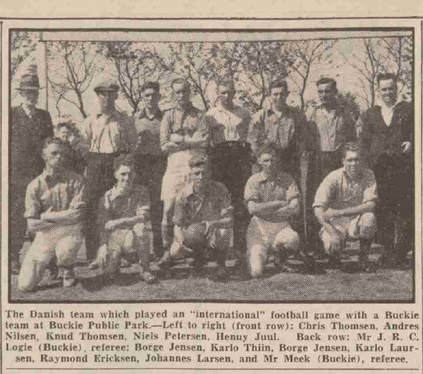 Johannes Larsen came to Buckie from Esbjerg very soon after the German occupation of Denmark and, indeed, he was one of the participants in the Buckie versus Denmark football match which was held in May 1940.  He arrived with his brother Karl on their boat 'Lady'.  He told his son that he was adamant:

"I'm not fishing for the Germans".

Johannes Larsen, the eldest of five sons, was born at Jerslev, Hjørring in the north of Jutland on the 2 January 1898.  He was the eldest son of Søren Peter Larsen (1866-1933) and his wife Maren Kirstine Christensen (sometimes given as Kristensen) (1871-1947) who came from Krustrup, Parish of Vennebjerg.  Søren was a grocer in Jerslev until, in 1899, they moved to Gærum near Frederikshavn where he became the manager of the cooperative store, a post he held until 1903. 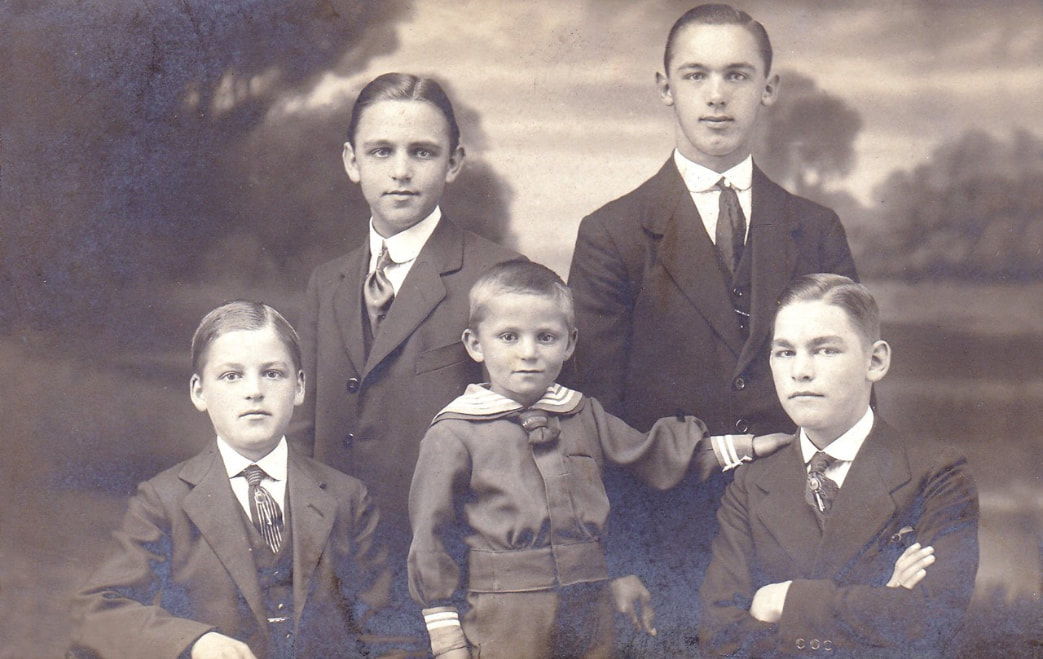 The five Larsen brothers round 1913. Back, Jens and Johannes. Front, Hans, Karl and Lars. Picture by kind permission of Gærum lokalhistoriske Forening og Arkiv.
Johannes was forty-one years old at the time and was to spend the much of the war in Buckie, fishing out of the harbour.  He, along with Karl, lived for much of his time in Buckie boarding with Mrs Legge at 36 Low Street who took in a number of Danish and Norwegian exiles.

Buckie was to have a major impact on Johannes because he was here that he met his wife-to-be, Catherine Thomson, who was the daughter of George Thomson, the owner of one of the town's boat yards.  Many of the other Danish fishermen lived in lodgings along Baron Street, at the bottom of the Bowling Green Brae, or in the Yardie just around the corner.  Catherine's parents, George and Margaret lived at the end of Baron Street in a fairly inconspicuous house.  George's widowed mother lived in the big family house directly above it 'at the heid of the brae' along with her two unmarried daughters.
In October 1943, Johannes Larsen and Catherine Thomson were married in Aberdeen.  Cathy's sister Jessie (Ross) sits on the right and Johannes's brother, Karl is on the left.  The couple lived for a time at 39 High Street, a house which had belonged to Cathy's maternal grandparents.  Their two daughters, Andrea and Kirstine were both born in Buckie. 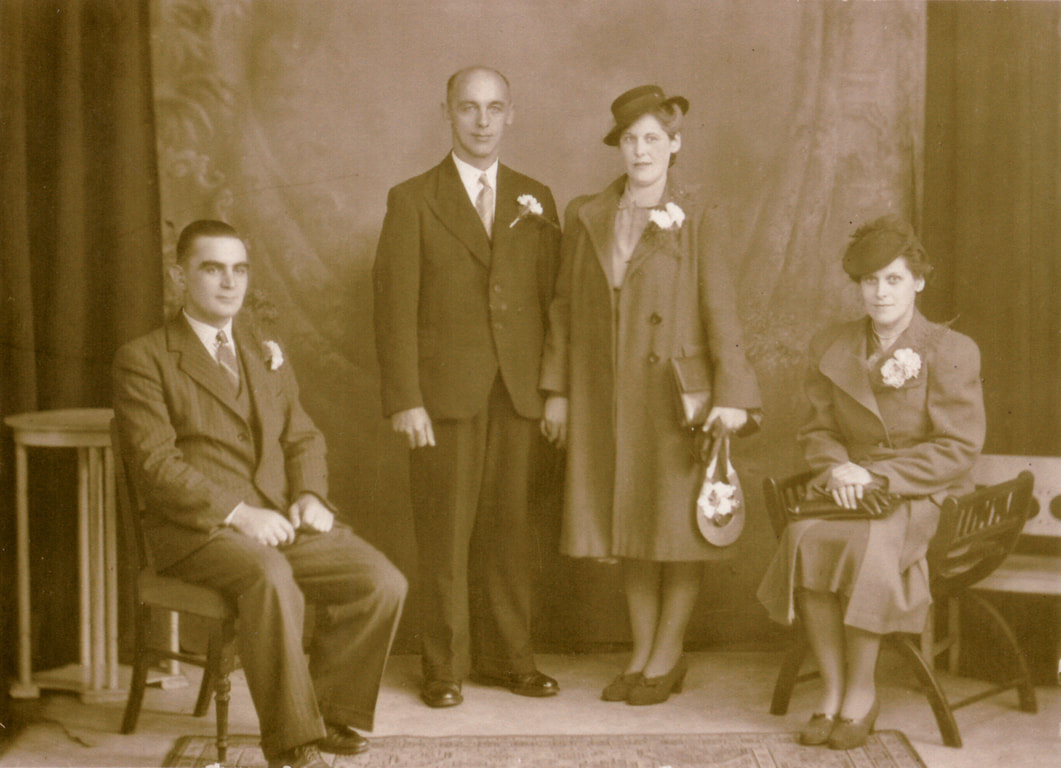 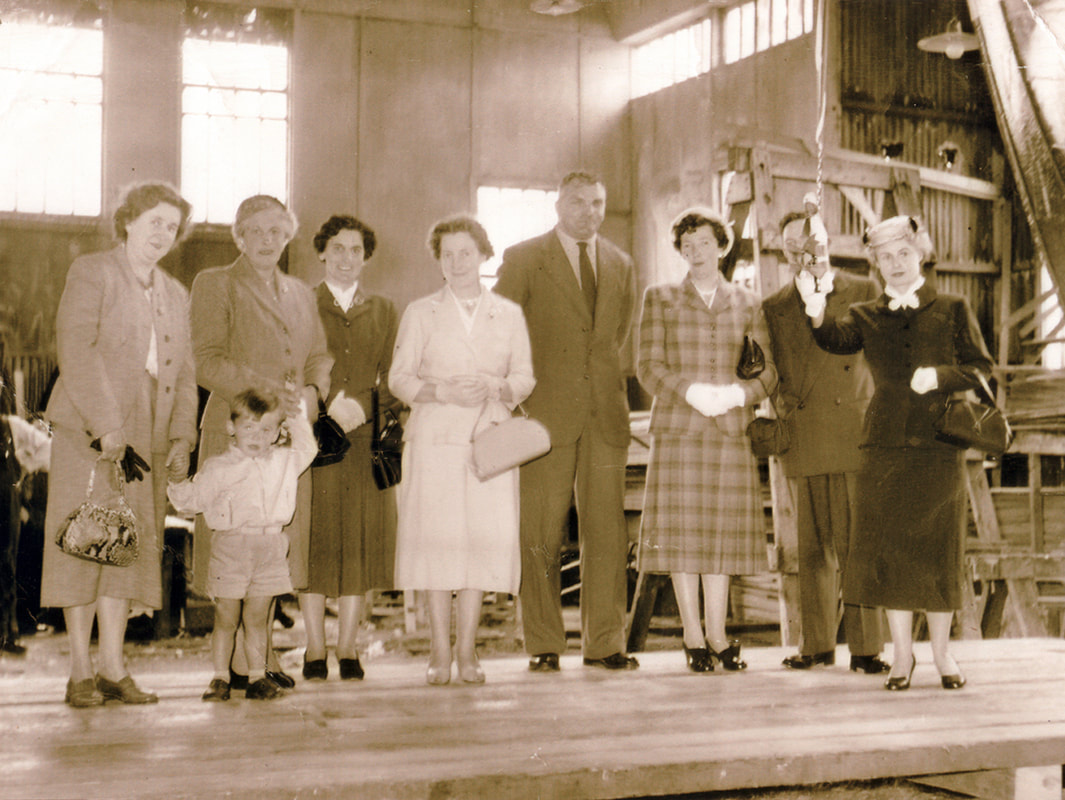 Catherine (second left) with her younger son George circa 1958 back in Buckie, attending the launch of a yacht at Tappies with various other family members.